The largest hospital of Saudi Arabia has been dressed up with an additional curtain wall. The designers updated the building’s image by adding a facade structure in front of the existing one.

Architectural-wise, a curtain wall using a tessellated Islamic pattern is wrapped around the original building. The lightweight tensile facade offers the hospital a new architectural image recalling the traditional patterning from the Middle East.

Additionally, the building improved its solar management. The solar radiations are now filtered through the millimeter thick textile skin that creates a first barrier against the strong solar radiation. On top of that, the engineered mesh structure of our T2 Facade element offers an optimal see through from the inside out, anti-glare properties, while keeping the building occupants’ privacy.

The structure was manufactured and installed by Al Ajllan Tensile Structures, a Riyadh-based company. They are specialised in tensile structures, car parks, sail shading, fencing and decorations. AL Ajllan is one of the biggest companies in the Kingdom of Saudi Arabia that has those specialties. As always, the collaboration with Al Ajllan went smoothly.

For the realisation of the mosaic patterns, Al Ajllan Tensile Structures created a composition of 3 coloured PVC coated textile mesh membranes. That was perfectly possible, as our architectural membranes exist in different colours. The tessellated pattern was precisely executed by assembling a repetition of selected quadrilateral shapes and the seams were covered with a white stripe of the same textile membrane.

To erect the textile facade, additional frames were connected on the existing walls. In a rapid manner, the lightweight membrane surfaces from 60 to 145 square metres are installed and tensioned using a kader system. 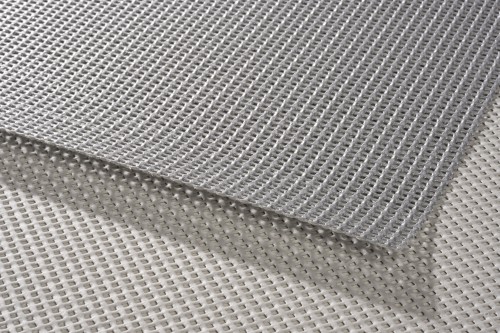 For this reskinning project, a non-Sioen membrane was replaced by our Fluo2Max thanks to its temperature resistance, easy cleaning and translucency.

Discover
Have a project in mind? Please contact us.